You have installed an adblocker. This Web App can only be displayed and edited correctly when the adblocker is disabled.

This section builds to provide a complete history of studies involving FES-rowing training. The studies appear chronologicallty the most current first. Once a study has been completed, the authors, title, publishing journal, and brief abstract of the studies findings will be reported. 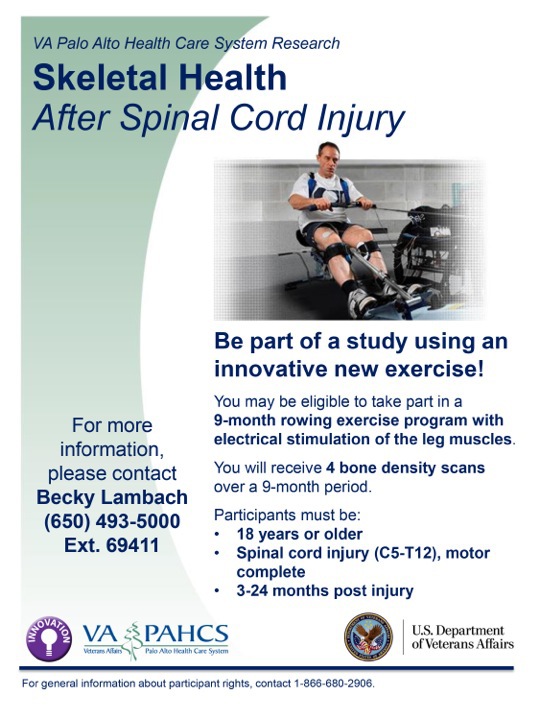 Researchers at the VA Palo Alto Health Care System are looking for volunteers to participate in a VA funded study about changes in bone health following spinal cord injury. All participants will receive four bone density scans over a 9-month period. Some participants will also take part in a rowing exercise program 3 times per week for 9 months which will use functional electrical stimulation of the legs muscle to perform the rowing action.

This study, the first of three with tetraplegia as the primary theme, was designed to assess the feasibility of FES-rowing in tetraplegia. Eight individuals with complete and incomplete injuries ranging from C4 to C7 successfully participated in the 12-month study. With some modifications to the equipment, all participants were able to continuously row for 30-minutes three times per week after completing 13 ± 7 FES-rowing training sessions. Peak and steady-state power outputs all increased over the 12-months. See FES-Rowing in Tetraplegia.

This prototype, ROWSTIM II, enabled training volumes of up to 30 minutes at a time necessitating the development of training protocols. Like ROWSTIM I, this system used 4-channels to stimulate components of the quadriceps and hamstring muscle groups. Target exercise volume was three 30-minute rows per week with an exercise intensity of 75% - 80% of a pre-determined peak oxygen uptake test.

This innovative new exercise device, ROWSTIM 1, was developed to investigate the potential health benefits of an exercise modality that combines concurrent voluntary upper limb exercise with FES-assisted lower limb exercise in people with SCI. ROWSTIM 1 was conceptualised by Dr Garry Wheeler. The device was based on a 4-channel FES-system that enabled components of the quadriceps and hamstring muscle groups to be stimulated via their respective peripheral nerves. Inevitably this first-of-a-kind prototype had a number of design limitations which restricted training to a few minutes at a time. However, it did demonstrate its future potential with design modifications. A new prototype was deveoped in 2002 called ROWSTIM II.﻿

Although the prototype developed in this study had a number of design limitations, the results highlighted the potential health benefits FES-rowing might offer including reduced risk factors for cardiovascular disease and improved quality of life.