The aim of this new website is to provide objective up to date information on all aspects of health and fitness for people with spinal cord injury. Only the most current and scientifically validated information will be reported.

The website was the inspiration of Robin Gibbons who sustained a complete spinal cord injury (SCI) at thoracic vertebra 4 (T4) in January 2001. It was a devastating experience that resulted in shock, upset and a wish to terminate life - a normal reaction to such a life changing event. Robin was advised that a successful rehabilitation must start with a sound coping strategy. As an ex Royal Navy diver, the choice was clear. 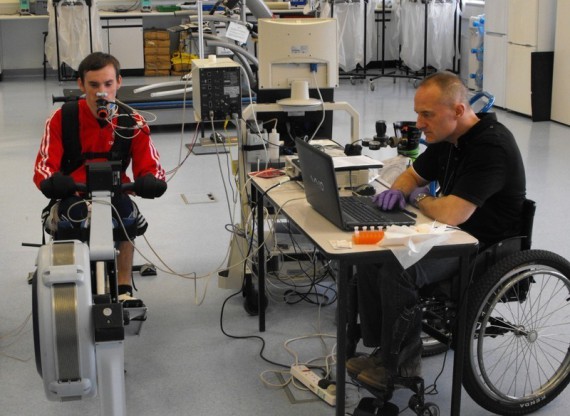 Robin began a punishing exercise regime of swimming backstroke 2 miles every day with alternating daily 30 minute weight training sessions or wheelchair push in a local park. He also stood for over 2 hours every day. The pool training was conducted at the Aspire National Training Centre, and one of the annual challenges Robin looked forward to taking part in was the annual Aspire 'Channel Swim' (see Useful Links). Initially Robin would swim the 22 miles in the Aspire 25 m indoor pool 100 lengths at a time. Then in 2003, Robin decided to challenge himself further with an attempt at swimming the 22 miles in 48 hours. He failed, completing the 1,416 lengths in 40 hours and 25 minutes!

However, Robin started to realise that even this high volume training did not challenge his cardiorespiratory system. In fact, his daily 2 mile swim did not feel intense enough when compared to pre-injury fitness levels. Robin also realised that his exercise regime was not sufficiently loading his lower limbs either. This inevitably resulted in disuse osteoporosis, a known consequence of SCI. Clearly the answer lay in trying to find some form of exercise that enabled him to use all 4 limbs concurrently.

The answer came early in 2003 when Robin was introduced to an innovative new exercise modality called Functional Electrical Stimulation (FES) rowing. The rest, as they say, is history! Robin joined the UK FES Rowing Group in May 2003 under the lead of Professor Brian Andrews. Robin was initially involved with the on-going design of the adapted ergometer. Then in 2008 he embarked on a PhD to investigate cardiorespiratory and skeletal health in SCI. The title of his thesis is 'The Feasibility of FES-Rowing in Tetraplegia'. These on-going studies will be reported on this site once the data is finalised and conclusions made. The science behind FES-assisted exercise along with scientifically validated health and fitness advice and recommendations will also be reported.

"I hope you find the information and recommendations in this site as interesting and exciting as I have in presenting them to you!"