This section presents the most recent scientific studies that have primarily used an FES intervention to mitigate loss of bone following SCI.

The articles are presented under the year of publication, newest first in descending date order. Each post includes the study title, contributing authors, the journal the article was published in, and a précis of the study or review findings.

2020: Bone changes in the lower limbs from participation in an FES rowing exercise program implemented within two years after traumatic spinal cord injury 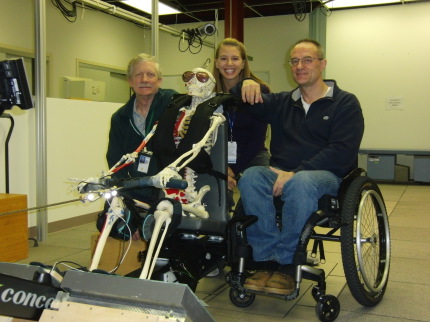 BMD in the distal femur and tibia were measured using peripheral Quantitative Computed Tomography (pQCT) at enrollment (T0) and after 30 (T1), 60 (T2), and 90 (T3) sessions. Bone stimulus was calculated for each rower at each time point using the average number of weekly loading cycles, peak foot reaction force, and bone mineral content from the previous time point. A regression analysis was used to determine the relationship between calculated bone stimulus and change in femoral trabecular BMD between time points.

Trabecular BMD in the femur and tibia decreased for all participants in T0-1, but the rate of loss slowed or reversed between T1-2, with little-to-no bone loss for most participants during T2-3. The calculated bone stimulus was significantly correlated with change in femoral trabecular BMD (P = 0.016; R2 = 0.458).

The study concluded that consistent participation in an FES rowing program provides sufficient forces and loading cycles to reduce or reverse expected bone loss at the distal femur and tibia, at least temporarily, in some individuals within two years after SCI. 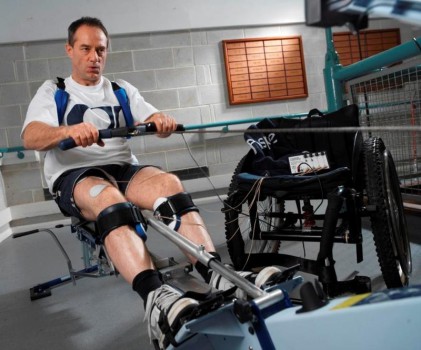 Male with a T4 SCI, during a 30-min FES rowing training session