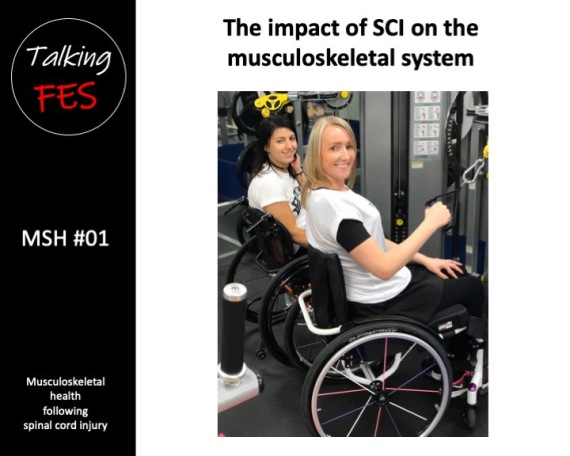 In the next post we'll take a look at muscular atrophy following complete SCI. 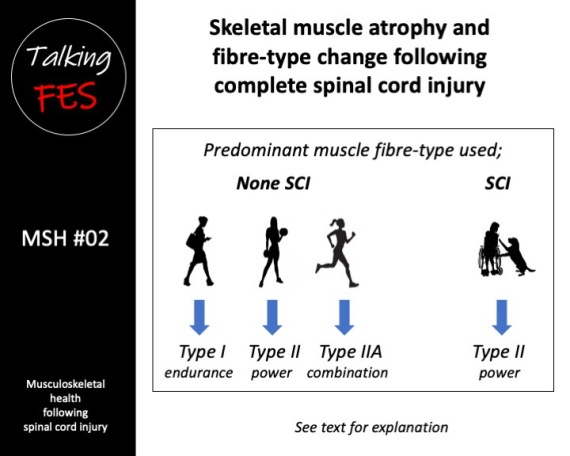 Compared to age, sex, height and weight-matched controls, acutely injured motor-complete Spinal Cord Injury (SCI) patients are reported to loose 33% of their thigh muscle cross-sectional area within six weeks of injury. Furthermore, intramuscular fat increases 126% over the same time period, and a further 26% within the following three months (Gorgey & Dudley 2007). Additionally, loss of skeletal muscle mass reduces the muscle force that can be applied to weight-bearing bones even when spasticity is preserved (Talmadge et al. 2002).

Additionally, compared to age and sex-matched controls, a higher than normal proportion of Type IIX fibres was found while Type I fibres were proportionally reduced in people with complete SCI who had significant spasticity (Olsson et al. 2006). It is important to note, although more powerful, since Type IIB and Type IIX fibres are highly-fatiguable, we are primarily interested in aerobic fatigue-resistant Type IIA fibres where SCI is concerned.

The underlying mechanism responsible for muscle fibre transformation is the adaptive capacity of skeletal muscle to activity-induced loading (Salmons 2009). For example, in the animal model, Salmons & Vrbova found that stimulating nerves supplying anaerobic Type II rabbit soleus muscle for several weeks at a low frequency of 10 Hz, induced aerobic Type I contractile characteristics (Salmons & Vrbova 1969). Importantly, the pattern of nerve impulses delivered to a muscle was also found to determine the resultant muscle fibre type (Salmons & Sreter 1976). In a later study, the pattern of nerve impulses was found to enable a muscle to adapt to the mechanical loads exposed to it (Salmons 1980).

Paralysis-induced muscle atrophy, loss of muscle force, and decreased resistance to muscle fatigue (Talmadge et al. 2002), combined with muscle fibre transition, are some of the key factors that underpin the loss of bone mineral density in people with paralysis. This ultimately results in the development of so-called SCI-induced osteoporosis. We will discuss osteoporosis following complete SCI in the next upload. 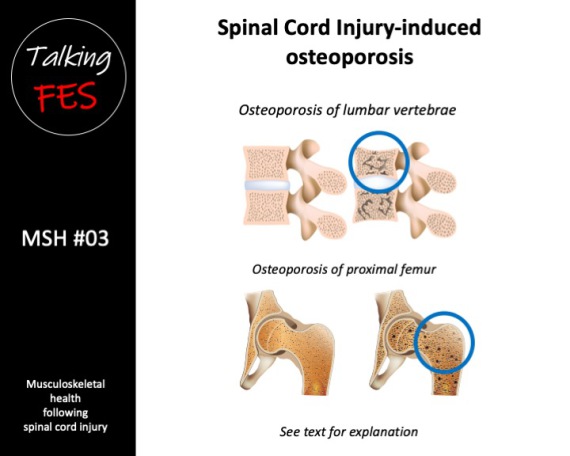 Osteoporosis is a characterised by low bone mass and a deterioration of bone tissue. Whilst the pathogenesis of SCI-induced osteoporosis is yet to be defined (Jang et al. 2006), it is generally considered to be a unique model of bone loss whereby specific regional sites are exposed to a complete loss of gravitational and voluntary muscle-induced skeletal loading (Uebelhart et al. 1995, Kiratli et al. 2000).

However, other mechanisms have also been considered. For example there is an uncoupling between bone formation and bone remodelling, where the amount of new bone formed decreases whilst bone resorption steadily increases (Uebelhart et al. 1994). Innervation and neuronal signalling peptides also play a role in normal bone remodelling; therefore sublesional bone denervation and the neural lesion may also directly contribute to the development of SCI-induced osteoporosis (Elefteriou 2005). Bone loss also occurs in the normally loaded and innervated upper limbs in people with paraplegia, which suggests a hormonal influence (Finsen et al. 1992, Frey- Rindova et al. 2000). Bone re-modelling regulated by nerve-derived signals may also contribute along with neuromediators such as noradrenalin (Elefteriou 2005).

Following complete SCI, the initial loss of bone mineral content (BMC) is estimated to approach 4% per month in trabecular sites, and 2% per month in cortical sites (Wilmet et al. 1995). Furthermore, trabecular bone mineral density (BMD) is estimated to reach 48% of pre-injury values within 3-years in the femur, and 58% in the tibia within 5-years. Additionally, cortical bone is reported to reach 30% of pre-injury values in the femur within 5- years, and in the tibia within 7-years (Eser et al. 2004).

These losses are likely superimposed on continual age-related bone loss (Chan & Duque 2002). Bone loss in complete SCI leads to the development of osteoporosis, and an increased the risk of low-impact fragility fracture (Bauman & Cardozo 2014). Fragility fractures in complete SCI predominate in the distal femur, and proximal and distal tibia (Zehnder et al. 2004a). Indeed, Eser et al. concluded that a fracture threshold of ~110 mg·cm3 existed in the distal femur, and ~70 mg·cm3 existed in the distal tibia, above which no fractures had occurred, and below which fractures due to minor trauma were common (Eser et al. 2005b).

We will look at fracture risk in the next upload. 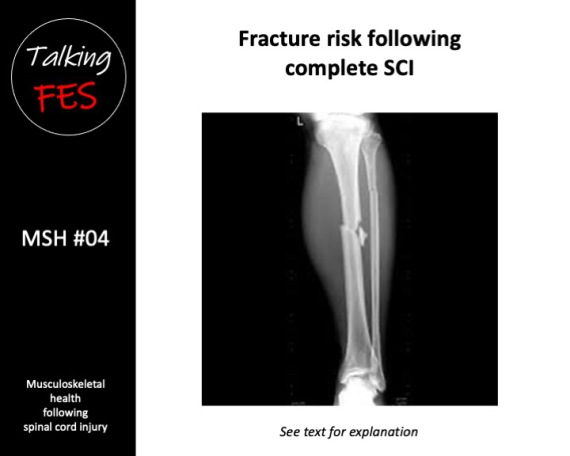 By 20 years post-SCI, fracture incidence is reported to be 4.6% per year (Zehnder et al. 2004a). Even active individuals with complete SCI at age 20 undergoing conventional standard of care therefore, have a very high likelihood of sustaining a fragility fracture in their lifetime. Fractures dramatically affect an individual’s quality of life and increase the risk of mortality (Krause et al. 2008).

In the next series, treatment strategies to mitigate the negative affect of SCI on the musculoskeletal system are reviewed.